For those who may not have read Part One of this series, allow me to briefly summarize: Women sometimes do stupid stuff when it comes to matters of the heart. Including marking their territory (e.g. leaving personal items in their men’s cars and homes as a way to “claim” them and deter female pursuers). I highly suggest you take a look at that piece before reading this one any further. Not only will it shed more light on this silly behavior, but it’ll also prepare you for the subject of this segment: social media.

Are you done? Great. Okay, first things first: Social media is the devil. Now before you all start flooding my comments section with all the wonderfulness of social media, I will say that it does have its benefits. Personally, I find Twitter rather amusing. However, social media has made it a little too easy for some women to go all “Fatal Attraction” on a guy, whether they are in a relationship or not. Women can now mark their territory via cyberspace.

If it were as easy as changing your relationship status from “single” to “married” or “in a relationship,” I wouldn’t bother bringing this sad display of insecurity to everyone’s attention. No, women are doing something even more childish. It’s called passive aggressive posting (PAP).

What is PAP and why the hell should anyone bother paying attention to it? Well, PAP is what females do when they want they want everyone to know who their man is. The sad fact of the matter is this man may or may not be in a relationship with this woman. She’ll click like on anything he posts and say really supportive, albeit vague, things on all his threads. Anywhere you see that man on Facebook, you can rest assured that she is right behind him, liking and commenting on everything he touches. But she’ll never once come right out and say “that’s my man.” Why is that?

Because nine times out of ten, he’s not her man.

PAP is often used by women who sit on the sidelines waiting for that prestigious NUMBER ONE LADY position to open up so she can slide in and start wrecking shop. She will already have made her presence known to everyone on his and her friend’s list that there is something amiss between the two, but neither will confirm it. She’s super supportive and ultra sweet, so when the relationship is finally confirmed, if ever, it will have made perfect sense for that man to pick that woman as his new boo.

But God help him if he likes another woman’s stuff.

This is when PAP attempts get really stupid. If the man shows another woman any type of attention, PAP lady will up the ante on her posts. She will become angry, hostile, sad, and bitter all in a ten minute span, evident by her continuous status updates. Eventually (give her about ten more minutes) she’ll have an amazing epiphany and realize she’s better off without this “cheating man.” She’ll play the role of a strong woman full of positivity who has overcome the worst hurt, the hurt of a broken heart. All because her man liked another woman’s picture.

Oh, the humanity *cue the violins.*

If I could send a cease and desist to every female who does silly stuff like this on Facebook, I would in a heartbeat. It’s sophomoric and it reeks of jealousy and insecurity. So what if he liked another woman’s picture? Does it really matter if he talked to another uterus on Facebook? It shouldn’t. What man is going to want a woman who will not allow him to fraternize with other individuals? I know, I know. He might be cheating. The woman might be scandalous. Blah blah blah.

Let’s change gears for a minute. Stalking your man on Facebook and then being passive aggressive about it is not the only way women mark their territory through social media.

Have you ever met a woman who had to know everything about everyone? Of course, you have. I’ll be the first to admit that most women are naturally inquisitive (read: nosy), myself included. We want to know what’s going on, who’s doing what, and how’s it being done. When it comes to men, our nosiness levels damn near fly off the charts.

This is what leads some women to go through their man’s phones, hack into their Facebook accounts, stalk women on his friend’s list, go through his emails, and make fake Twitter accounts so they can follow their guy incognito. Women will practically become CSI agents when it comes to finding dirt on their men via social media.

Should they find any evidence of foul play or wrongdoing, will they sit down and have a mature conversation about the situation? No. Will she pack up her things and leave him for good? Probably not. I’ll tell you what she will do, though. 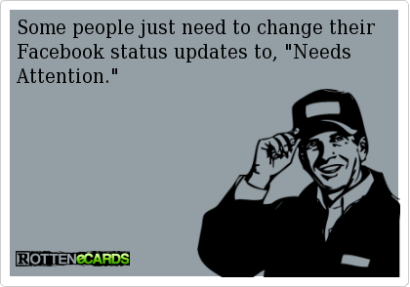 I’m sure we know that one female who plasters her man’s business all over the social network: who he’s slept with, STDs he’s gotten and passed on, baby mama drama, work history, fights, arguments, and all other personal stuff. Most of the information she uses in this case is stuff she found out about via social media. And instead of handling it like a mature adult, she puts it back on social networks.

As I said before, this is also a type of territory marking. By obtaining this personal information and putting it on Facebook, Twitter, or whatever other social medium she chooses, she is essentially saying to the world “look what my man did to me.” Now, I’m not talking about those women who will say one thing and that will be the end of that. No, I’m talking about the women who will continuously make these posts, the ones who always seem to have some drama going on in her relationship every five minutes, which anyone can clearly follow by reading her constant status updates.

True, these women may be going through a rough patch, but I guarantee everyone will know who her man is by the end of her Twitter rants over her latest discovery from his archived inbox conversations.

I think another rule of thumb is warranted here. Keep your personal business off of social media. What you put out will never go away, and it often has a way of biting you in the ass later down the road. Passive aggressive posting, cyber-stalking, and hacking your man’s social media accounts is childish, insecure, and it makes you look bad, not him.

There’s no need to mark your territory.

**Author’s note: Men and women are guilty of this behavior, but since I mostly see it in women, that’s what I chose to discuss. And, yes, there are exceptions to every rule 🙂

9 thoughts on “Do You REALLY Need to Mark Your Territory? Pt. 2: Facebook and Other Evils”