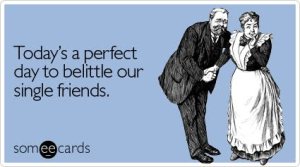 The day millions of women dread is almost upon us. I used to be like those women. Sad, lonely, single little me, hating any and everyone who had a “bae,” or whatever the hell people call their significant others nowadays. It is bae, isn’t it? Well, that’s just stupid…

Five sentences in and I already sound bitter. Sheesh. I know I do, and that’s okay. I have no problem explaining to each and every one of you that I’m not bitter, I’m irritated. There’s a difference.

Let me back up a bit. Remember how I just said that I used to be one of those women who looked at Valentine’s Day as the end of the world because I was usually single? The key words here are “used to,” past tense. The simple truth is I don’t feel that way anymore.

The older I get the more I realize that not having anyone on my arm on the 14th is not as bad as people make it out to be. Truth be told, I’d rather have someone  in my corner for the entire 365 days in a year instead of having some random dude in my face for a day. I don’t need or want obligatory roses on V-Day. I’d rather you give me some tulips out of the blue just because. Or a fresh pint of Ben & Jerry’s. I’m far from picky.

My point is that I don’t need the hoopla of V-Day, single or otherwise.

So why the slow burning anger? Clearly, I must have some residual hard feelings for the holiday given the tone of this letter, right? Nope. That’s not right. I am okay with my single status right now. It’s everyone else who thinks I should feel bad for being single that fuels my February fury.

Look, I get that you’ve found your perfect Romeo and Juliet love affair (side note: they killed themselves three days into the relationship. Good luck), but I don’t need to follow your lead. I don’t need to “catch up,” I don’t need you to tell me that something must be wrong with me because I’m not some dude’s baby mama. If you want to shack up and play house with your “bae” whom you barely know, go right ahead. Who said I had to do the same? No one. Absolutely no one. So please, by all means enjoy your life. Enjoy your uber romantic V-Day dinner at such fine dining restaurants as Red Lobster and Olive Garden (all you can eat cheddar biscuits and endless salad. What more could a girl want?). Do whatever makes you happy, but don’t turn your nose up at me for not indulging.

Believe it or not but I can actually live in a world without cheddar biscuits. *Gasp* Shocker!

Obnoxious Couples, you might read this and think I’m just one angry, militant, lonely woman. Please don’t, because I know I’m not. I just want you all to understand two things.

Am I where I want to be in life right now? Since I’m working a 9 to 5 to stay alive – thanks Beyonce – I’m going to say no. But I’m far from miserable. I’ve been down that road before, and I’ll be damned if I go back. I’ve worked too hard on myself to go back to the bad place, and that has nothing to do with my marital status.

Single people can and do live fulfilling lives. I go out, I date, I have my hobbies, interests, and yes, even a social life. My life has never revolved around the availability of a penis, so it’s not about to start now.

The second thing I want to share is this: Lonely doesn’t mean desperate.

Contrary to popular believe, I’m really not lonely with the looming presence of V-Day. However, I have been there before. There were times I felt such a fierce loneliness that I could barely function. Again, that goes back to the dark place I really don’t like to revisit. In a nutshell, I know what it’s like to feel an immense sense of longing for authentic companionship; however, even at my worst I was never desperate. I never sought out or latched onto obviously unhealthy relationships just for the sake of saying I have someone. And now that I’ve gotten older, more mature, you best believe I’ve gained a sense of self and self-worth. There’s no such thing as settling for less than what I’m willing and able to give.

I’m not being stuck up. I’m being honest.

If I won’t get into relationships with every Tom, Dick, Harry, and Jane just because, why should I succumb to V-Day advances from men I’m not interested in? So I can say I have something to do for that night? No thanks, I’m good.

V-Day is just another day. That’s it. A day between February 13th and 15th. I plan to make the most of that day the same as I do any other. Yes, I’m single. No, I’m not sad. And no, there’s nothing wrong with me.

So for all you couples who look down on single women with a mix of pity and judgment, cut it out. Just stop. You have your day of romance. I have my year of greatness.